Behind the Springs Podcasts 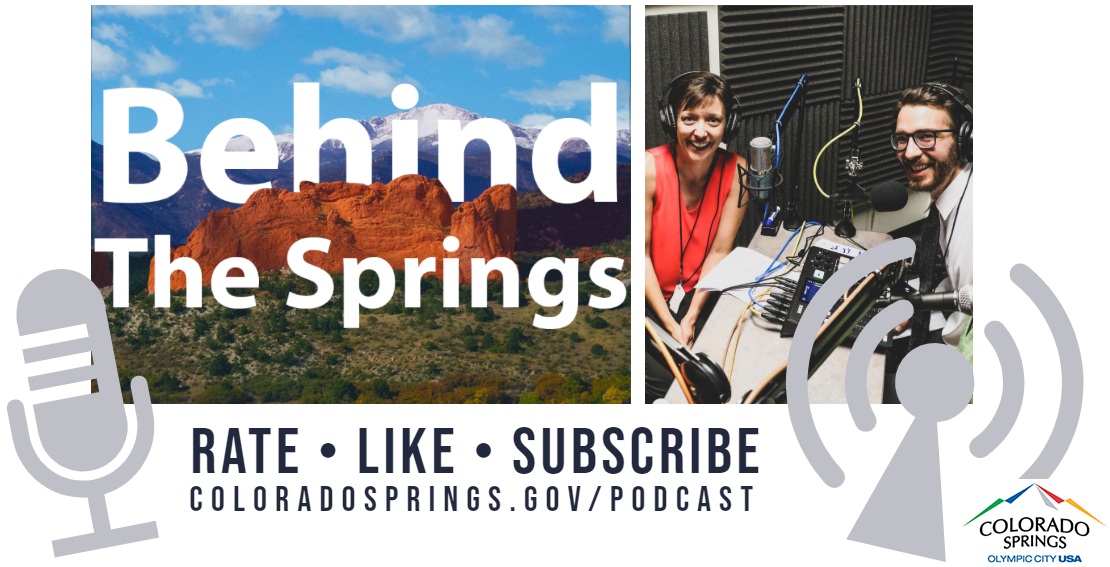 Can a local government podcast be fun? Jennifer Schreuder and Ted Skroback from the City of Colorado Springs Communications Department say “yes!” Join Jen and Ted twice a month for our lighthearted, in-depth discussions with Colorado Springs' elected officials and employees as we learn what keeps Olympic City USA ranked in the country's top three best places to live. If you enjoy life with Pikes Peak and Garden of the Gods but want to be more in the know about what's going on in your city, this podcast is for you.

Have a question or comment? Send them to BehindtheSprings@ColoradoSprings.gov

She’s a 2019 World Champion women’s freestyle wrestler and she trains right here in Olympic City USA! Hear from Tamyra Mensah-Stock about her exciting journey as she sets her sights on competing in the Olympic Games Toyko 2020 this summer. What’s it like to train in Colorado Springs? What does it take to become an Olympic athlete? Jen and Ted ask these questions and many more. Join them to learn about women’s wrestling and this amazing local athlete who you will hopefully be watching compete on NBC this summer!

Does the city have a plan to deal with all of this growth? Of course! A lot of that centers around our planning department, so we’re talking with the director to get an idea of what our city planners do and what they don’t do. Are you wishing for a certain store or restaurant in your neighborhood? Or do you wish all the development would just slow down? Hear about the city planning’s role and why it’s so important to have a vision for the future of COS.

The city’s parking enterprise has increase parking rates and extended meter hours downtown for the first time in 14 years. It’s not exactly great news … in fact, even our parking director’s mom had something to say about it!  But Jen & Ted want you to know the reason for the change, where the money is going and how it impacts you.

Colorado Springs is lucky number 13! We feel lucky in Olympic City USA to make it on the New York Times’ prestigious “52 Places to Visit in 2020(link is external)” list. Jen and Ted talk about all the reasons that our city is making headlines like this and why so many people want to live in or visit Colorado Springs!

Listen to the special edition

Jen and Ted have a great conversation with Mayor John Suthers about his job as Mayor, why he chose public service and public office and how he stays focused. He shares the importance of setting goals along with his favorite part of serving as the Mayor of COS.

Pothole on your street? Want to find the nearest park? There’s an app for that called GoCOS! It’s free to download onto your phone so that the power is at your fingertips. Hear from Citizen Engagement Specialist Jay Anderson about the features of the city’s new app and why the city needs you to use it!

Homelessness is a complex issue, but Jen and Ted get some good information from the city’s Homelessness Response and Prevention Coordinator, Andy Phelps. What organizations and agencies does the city work with on this issue and what progress is being made? How can you donate and where does the money go? These are answers everyone needs to know. Plus, you won’t want to miss an emotional story at the end!

The Colorado Springs Fire Department does so much more than fight fires! Typically fire related calls are only one percent of CSFD call responses. Jen and Ted speak with Sunny Smaldino, Safety Educator for CSFD’s Division of the Fire Marshal, about preventative measures for fire and general safe behavior. While we try to educate, we also want you to laugh, so hear some funny stories from students that Sunny has met over the years of educating the youth in Colorado Springs!

Episode 9 - "This Episode Could Safe Your Life"

We’re getting a little more serious than usual to talk about the high number of traffic fatalities in Colorado Springs, and what our police officers identify as the major reasons. Listen to some frightening stories and life-saving tips from the lead of the Major Crash Team, Sgt. Jim Stinson. Jen and Ted will help provide you with a new appreciation for our police officers, the opportunity to reflect on your own driving habits and the chance to be more aware and ARRIVE ALIVE!

Like a Phoenix the Colorado Springs Airport has risen from the ashes of a fire that ruined staff offices in 2018 to winning Colorado Airport of the Year in 2019! Jen and Ted speak with Dana Schield about airport improvements, businesses growing in the area, and of course… HALF PRICE HOLIDAY PARKING!

It’s budget season and that impacts YOU! Find out about the priorities included in the 2020 budget from our Chief Financial Officer Charae McDaniel. She shares the most challenging part of her job and how you can get involved in the budget process. You don’t even have to love numbers to enjoy this episode!

Episode 6 "Take the Ball by the Horns"

This week we're talking to Colorado Springs City Council President Richard Skorman. Find out how a group of middle school kids helped get a law passed that was later adopted by other cities across the country. If you're not familiar with what city council does or how what they do affects your everyday life, don't feel bad! Just tune into this episode of Behind the Springs! We made it fun, promise!

Episode 5 "Parachuting Vehicles onto the Mountain"

Pikes Peak! America’s Mountain! The one 14er to rule them all! Sandy Elliott, Operations Administrator for Pikes Peak—America’s Mountain, joins Behind the Springs to give an update about the new summit complex construction, the challenges of building a structure in the sky, funny stories from the mountain and of course Fast and the Furious.

Episode 4 "You have to be smarter than the raccoons"

Animals and mannequin feet are just a couple things the City’s Stormwater Enterprise has to deal with daily. Stormwater Manager Richard Mulledy joins Jen and Ted to talk about the City’s amazing stormwater infrastructure progress. Mulledy even fesses up to not having ditched playing in the ditches when he was a kid and tells the story that propelled him to the position he’s in today.

Jen and Ted take a quiz about our City streets with questions about 2C, PPRTA (Acronym Alert!) and everyone’s favorite subject in Colorado Springs… POTHOLES! We are joined by Corey Farkas, Manager of the Public Works Operations and Maintenance Division (AKA streets and other cool stuff). Learn about Corey’s background and how he has Olympic City USA running through his veins in more ways than creating the arterial roads to get you around the City!

In this episode of our Behind the Springs podcast, Mayor John Suthers and Cultural Services Director Matt Mayberry talk about the history of Colorado Springs, which includes a unique zoo with Princess Alice as the headliner. The Sesquicentennial (150th Anniversary) celebration for Colorado Springs is two years away, so what’s in the works for the big party?

Our City’s founder General William Palmer would be proud: We kick off the Colorado Springs podcast with a look at our parks department! Parks, Recreation and Cultural Services Director Karen Palus and TOPS (Trails, Open Space and Parks) Manager Scott Abbott share information about a potential November ballot item that would bring more City rangers to our trails and open spaces, as well as some improvements to popular neighborhood parks. Of course, we get to know our guests as we take a look Behind the Springs, and we find out about sweat equity!

We are excited to launch a new podcast called "Behind the Springs!" It's a casual, in-depth look at local government with hosts Ted Skroback and Jen Schreuder. Spoiler alert: This podcast is going to be FUN!