When considering the bridge project underway in North Cheyenne Cañon Park, a quick history lesson is helpful. The cherished property has been part of the parks system since 1885 when voters went to the polls and voted for the purchase of about 640 acres for $5,000, making it the very first park purchase approved by the citizens of Colorado Springs.

“It was really at the insistence of the public who demanded and wanted this pace to be publicly available,” said Leah Davis Witherow, curator for the Colorado Springs Pioneers Museum. “They had been lamenting since the early 1880s how this had become a private space with a toll gate. People had to pay between 10 to 50 cents to make their way up the canyon. Colorado Springs residents felt this was part of their backyard, a place that should be open and accessible for all.” 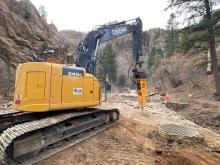 Today, a project is underway to replace three historic bridges on North Cheyenne Canyon Road. The road is closed until May 2022, but the trails remain open. The work is unique compared to typical bridge replacement.

“The original bridges had old railroad rails and an arch culvert and were built in the early 1900s,” said Aaron Egbert, project manager. “We are salvaging as much of the original stone work as possible to reuse on the new structures to keep that historical element and context.”

Egbert notes that the bridges will be wider, stronger and safer, but the goal is for them to appear as if nothing has changed.

“North Cheyenne Cañon is a park that’s always stayed true to its purpose.” said Witherow. “It’s a place where you can get away from the city and immerse yourself in nature. The thoughtful work they’re doing in the canyon to really honor the history and tradition of this place makes me really proud of the City of Colorado Springs.”

The $4 million project is funded by the city, grants and the Pikes Peak Rural Transportation Authority (PPRTA).

Detailed project information can be found at ColoradoSprings.gov/NCCBridgeReplacement.

Get a weekly update of news, events and upcoming public meetings from the City of Colorado Springs.